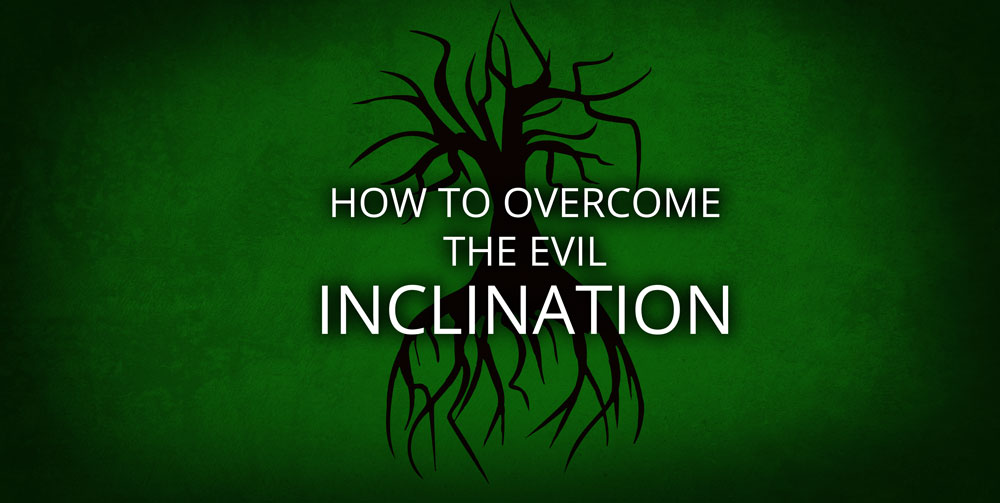 We don’t have to work to overcome the

יצר הרע (evil inclination) by doing tefillin or tzitzis or other traditional attributes of the law that were handed down to us through Babylonian interpretations in the Talmud and other books.

The יצר הרע – evil inclination was destroyed in all its fortress of power by the משיח Messiah himself. This is one of the greatest works and purposes that the משיח Messiah accomplished who was promised by G-d to redeem Israel and all mankind. This accomplishment is one of the seals of G-d that the Messiah is the גואל redeemer. The משיח ישוע Messiah Yeshua (JESUS) totally annihilated the יצר הרע the evil inclination on the צלב cross, or in Torah terms, the נס ness. This was a fulfillment of the prophetic act of Moses in the Torah according to the commandment of G-d that saved Israel. “As Moses lifted up the serpent in the wilderness, so must the Son of Man be lifted up.”

“And the LORD said to Moses, Make thee a fiery serpent, and set it upon a pole: and it shall come to pass, that every one that is bitten, when he looks upon it, shall live. And Moses made a serpent of brass, and put it upon a pole, and it came to pass, that if a serpent had bitten any man, when he beheld the serpent of brass, he lived.” Numbers 21:8-9.

Now the נס ness was made of brass נחשת , not of gold or silver, because the altar of sacrifice for the atonement was made of brass, not of gold. The word נס ness is used here for pole because a miracle occurred when the people gazed upon the serpent on the pole, the poison in their bodies was annihilated, and they were healed, and they lived. The Messiah spoke about himself having to be lifted up on a pole (a cross is a pole) in order to annihilate the יצר הרע evil inclination, and cause the inquity of the people to pass from them, which would result in a miracle, but in this case even a greater miracle, not only to live, but to live forever. “That whosoever believes upon him (looks upon him as the children of Israel gazed upon the serpent on the pole in the wilderness) should not perish, but have eternal life

חיי עולם .” Now HaShem gives us a NEW BIRTH, and clothes us with a NEW NATURE that has no יצר הרע evil inclination, and is created in righteousness, the work of HaShem himself.

This fulfills the words of the prophet: “After those days, says the LORD, I will put my law in their inward parts, and write it in their hearts.”

Many Jews who do not know who is the Messiah have the pattern of righteousness in the law, and are trying to sew their own clothes according to it, like Adam and Eve did in the garden.

But HaShem says: “I will also clothe her priests with salvation, and her saints shall shout aloud for joy!”

The LORD clothed Adam and Eve with the skins of righteousness.

“Unto Adam also and to his wife did the LORD G-D make coats of skins,

He clothed Joshua the High Priest.

“Now Joshua was clothed with filthy garments, and stood before the angel. And he answered and spoke to those who stood before him, saying, Take away the filthy garments from him. And to him he said, Behold, I have cause your iniquity to pass from you, and I will clothe you with change of raiment.” Zechariah 3:3-4.

HaShem will clothe his people.

But those who don’t know the Messiah say “We will clothe ourselves, and sew our own garments.”

This is the doctrine of Babylon for “she is clothed with scarlet, and decks herself with ornaments, gems and precious pearls, but her souls are slaves.”

To be clothed by HaShem is to observe the שבת Shabbat. He that is clothed with the righteousness of HaShem has ceased from his own works, and entered into the work of HaShem, which is perfect.