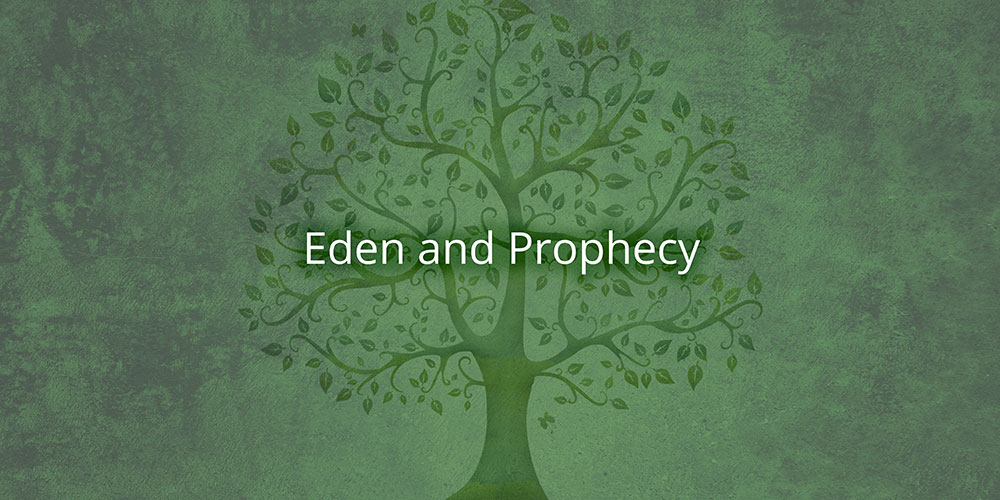 There is an amazing reference to Eden in the Scriptures

and through whom the promised Messiah was to come.

“Therefore Sarah laughed within herself, saying

‘After I am waxed old shall I have pleasure ,

my lord being old also?'”

of the word Eden, is used to designate sexual pleasure.

HaShem placed this word in Sarah’s mouth to reveal

that through Abraham’s seed through Sarah he was

preparing the way for mankind to return to the pleasures

of Eden. It was through Sarah that Israel came, and the

Messiah sprang out of Israel. The Messiah would restore

the human race to the glories that Adam had in the

garden of Eden before the fall, and to greater glories.

The Messiah Yeshua משיח ישוע accomplished this through

his death, burial, and resurrection on the third day.

In Psalm 36:9 the word Eden is used in reference to

the House of G-d.

“They shall be abundantly satisfied with the fatness of your House;

and you shall make them drink of the river of your pleasures.

For with you is the fountain of life:

in your light we shall see light.”

The fountain of life is a reference to

By returning us to the Presence of G-d,

he restores us to the pleasures of Eden that

were lost in the fall of man and the expulsion

of man from the Garden.

In Nehemiah 9:25 Eden is used in reference

to the promised land of Israel which HaShem

promised to our fathers Abraham, Isaac, and Jacob,

and to their descendents (Israel).

“And they took strong cities, and a fat land,

and possessed houses full of all goods,

and fruit trees in abundance:

so they did eat, and were filled, and became fat,

and delighted themselves in thy great goodness.”

This shows us that being Jews,

when we live in the LAND OF ISRAEL,

(the land of promise), HaShem makes us

the garden of Eden. This will reach its culmination

when the Messiah Yeshua משיח ישוע reigns in

the Kingdom of David in Jerusalem.

As the enemy of mankind and of G-d deceived

Adam’s wife and stole the blessings of the Garden

of Eden to bring about the curse, so even he does now.

He uses techniques to counterfeit and to deceive, and plays

upon man’s desire to return to the Garden. But G-d placed

cherubims there to block man from returning by his own devices.

“Then I beheld all the work of G-d,

that a man cannot find out the work

that is done under the sun:

because though a man labor to seek it out,

yet he shall not find it; yes, further:

though a wise man think to know it,

yet shal he not be able to find it.”

And again it is further written

“He has made everything beautiful in his time:

also he has set the world in their heart,

so that no man can find out the work

from the beginning to the end.”

The enemy of mankind uses this desire to bring

in reference to Babylon, the great harlot. She imitates

the pleasures of the garden of Eden.

“Therefore hear now this, you who are given

to pleasures, who dwells carelessly,

who says in your heart,

I am, and none else beside me.

I shall not sit as a widow,

Neither shall I know the loss of children:

But these two thing shall come to you

in a moment, in one day,

the loss of children and widowhood:

they shall come upon you in their perfection

for the multitude of your sorceries,

and for the great abundance

For you have trusted in your wickedness:

You have said “No one sees me.”

Your wisdom and your knowledge,

they have perverted you;

and you have said in your heart

“I am, and there is none else beside me.”

The phrase “you who are given to pleasures”

that Hashem uses when speaking to the Harlot

This indicates utopian worlds such as

‘The Lost Horizon’, ‘Shangri-La’, and

all the utopian genres of literature. It is the

longing for the ideal life, the perfect world.

The harlot dwells ‘carelessly’; that is, she goes back

to the security of paradise, to a ‘Nirvana’, to a

place without the cares of life in the ‘real’ world.

She gives in to pride, and gives practices witchcraft.

She uses drugs and alcohol to put her victims

in a false eden that is secure, without trouble,

full of pleasure. She propagates the Nazi super race,

the tenets of ‘New Age’, the Nirvana of Utopia.

Babylon is full of her own wisdom and knowledge,

and says in her heart ‘I am, there is none beside me’,

thus making herself to be her own god.

She is dressed in scarlet.

the first king of Israel,

through whom the Messianic line did not come:

Saul taught the daughters of Israel to indulge in

the pleasures of Babylon, and clothed them

in the scarlet of Babylon and with ornaments of gold.

“You daughters of Israel, weep over Saul,

who clothed you in scarlet,

who put ornaments of gold upon your apparel.”

Here scarlet is linked with ‘delights’,

the root of which word is Eden עדן .

Saul, a type of a worldly king, gave them

a negative preparation in scarlet-a symbol of royalty,

so that they were given to worldly pleasures,

and he caught the daughters of Israel with it.

But Isaiah the prophet equates the scarlet with sin.

“though your sins be as scarlet.”

Babylon is the enemy of Israel.

The Prophet Jeremiah identifies the

king of Babylon, the enemy behind Nebuchadnezzer,

who stole the original pleasures of the garden of Eden,

and the steps of the method by which he uses

these pleasures to destroy in Jeremiah 51:34.

The enemy is none other than the devil.

“Nebuchadnezzar the king of Babylon

he has crushed me,

he has make me an emply vessel,

he has filled his belly with my delicacies,

he has cast me out.”

This outlines the six steps

that the enemy uses to destroy

5. He fills his belly with our delicacies.

These are the pleasure we had in Eden.

He uses deceptive tactics to devour

the strength of G-d’s people,

and render them ineffective.

As a lion he roars to get the scent of his prey,

and uses the element of surprise to destroy them.

He has stolen the pleasures of Eden,

and he steals the pleasures of the people of the LORD.

“The violence done to me and to my flesh

shall say the inhabitant of Zion:”

of the word Eden עדן in reference to time.

“As concderning the rest of the beasts,

they had their dominion taken away:

yet their lives were prolonged

“And he shall speak great words

against the Most High,

and shall wear out the holy people

of the Most High,

and think to change times and laws:

and they shall be given into his hand

until a time and times

and the dividing of a time.“

Here time is used in reference

to the pleasures of Eden.

The pleasures of Eden and Eternity

are connected. Here is no death or aging.

This is what the world, Babylon, seeks after.

This is the idea of a perfect world.

This is why the world, Babylon,

and the people in it seek to go back

and live in the past.

They are seeking the youth, the happiness,

It is the reason people become addicted

to drugs and alcohol.

They are seeking to escape the pains of this world

and get into the perfect happiness of Eden.

In Ecclesiastes 3:11 it is said

“He has set Eternity in their heart.”

Eden has no time, no corruption.

In the Lost Horizon by James Hilton,

when the woman left Eden,

Pleasure is used as an escape

into an idyllic world.

This is why people live in their past,

Time is used as a pleasure, as an escape.

It is a doctrine of Babylon.

It can be used by the false messiah.

With the advent of ‘virtual reality’,

the mark of the false messiah could cause

the people to receive the mark to enter

into an illusory pleasure world,

The mark is prophecied in Revelation 13:16.

“And he causes all, both small and great,

rich and poor, free and bond,

to receive a mark in their right hand,

or in their foreheads.”

This ‘mark of the beast’ could cause

the people of the world to enter

into a utopian state of deception that

they would not want to leave until it

was finalized with their ultimate destruction

“And the third angel followed them,

saying with a loud voice,

If any man worship the beast and his image,

and receive his mark

in his forehead, or in his hand,

the same shall drink of the wine

of the wrath of G-d,

which is poured out with mixture

into the cup of his indignation:

and he shall be tormented with fire and brimstone

in the presence of the holy angels,

and in the presence of the Lamb:

And the smoke of their torment

ascends up for ever and ever:

and they have no rest day nor night,

who worship the beast and his image,

and whosoever receives the mark of his name.”

and a dividing of an Eden (time).

of the false messiah, a utopian state of deception.

It is the work of Babylon.

It is the enemy of Israel.

It is the enemy of the people of G-d.

It ends in ultimate destruction.

The true work of HaShem

through the Messiah Yeshua משיח ישוע

will destroy the work of Babylon

and of the enemy, and he will set up

the true kingdom of G-d over Israel and the nations.

In the reign of the true Messiah,

HaShem will establish the true utopia

of Eden and the tree of life throughout

This fulfills the dream of

as it was interpreted by Daniel the Prophet:

“You gazed (upon the image in the vision)

until you saw that a stone

was cut out without hands,

which smote the image upon his feet

that were of iron and clay,

and broke them to pieces.

Then were the iron, the clay,

the brass, the silver, and the gold,

broken to pieces together,

of the summer threshingfloors;

and the wind carried them away,

that no place was found for them:

and the stone that smote the image

and filled the whole earth.”

The stone is none other than

and the mountain is his kingdom.

The prophecy of hope is repeated

twice by two prophets of the LORD

It is repeated twice to guarantee

that the prophecy is established,

and HaShem will certainly cause it to happen.

“But in the last days it shall come to pass

that the mountain of the house of the LORD

in the top of the mountains,

and it shall be exalted above the hills:

and people shall flow unto it.

And many nations shall come, and say,

the mountain of the LORD,

and to the house of the G-d of Jacob;

and he will teach us of his ways,

and we will walk in his paths:’

for the law shall go forth of Zion,

and the Word of the LORD from Jerusalem.”

And again it is written

“In that day it shall be said

to Jerusalem, Fear not!

Let not your hands be slack.

The LORD your G-d

in the midst of you is mighty;

He will rejoice over you with joy;

He will rest in his love,

He will joy over you with singing.”