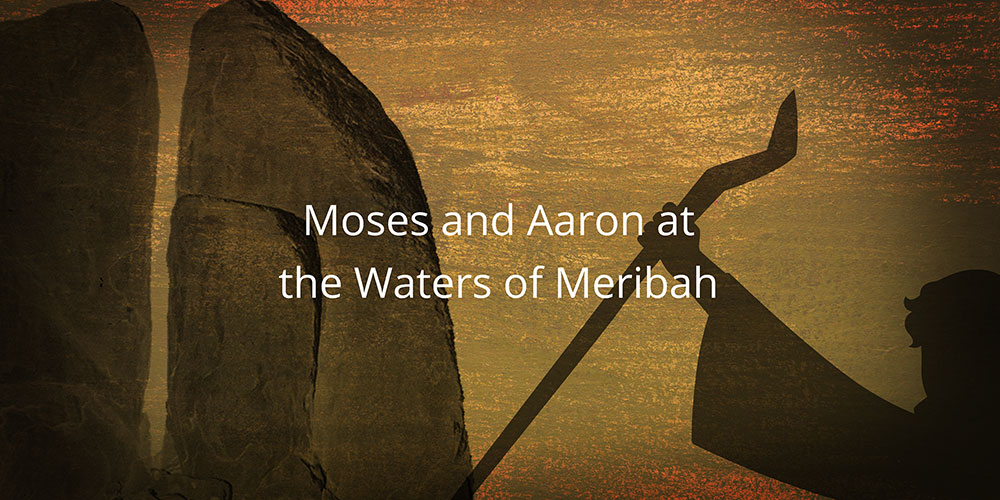 Moses and Aaron at the Waters of Meribah

Moses and Aaron at the Waters of Meribah

The people quarreled with Moses, and they said, “If only we had died with the death of our brothers before the Lord. Why have you brought the congregation of the Lord to this desert so that we and our livestock should die there.  Why have you taken us out of Egypt to bring us to this evil place; it is not a place for seeds, or for fig trees, grapevines, or pomegranate trees, and there is no water to drink.” Numbers 20:3-5.

Moses and Aaron left the assembly.  They went to the door of the Tabernacle and they fell on their faces before the LORD.  The glory of HaShem appeared to them and spoke to them directly, giving them precise directions about what to do.

But apparently Moses and Aaron were still upset.  Their spirits were still aggravated, and they did not enter that PLACE OF REST.  This REST is stated in Psalm 132:14.

“This is my resting place forever.  Here shall I dwell: for I have desired it.”

Moses and Aaron had done the right thing by going to the door of the Tent of Meeting, but they did not stay there LONG ENOUGH until their spirits had ceased from being aggravated and they reached that PLACE OF REST.  The book of Hebrews exhorts us and says LABOR TO ENTER INTO THAT PLACE OF REST, so that YOU DON’T FALL INTO UNBELIEF!  You can pray in tongues, and still not enter that place of rest, and your spirit is still aggravated.  You are going to screw up.  If your spirit is still upset, then you will act, not out of a place of SHALOM  שלום, but acting out of works, in UNBELIEF you will screw up.

Surely I have calmed and quieted my soul

This place of rest keeps us from entering in to zedim זדים (pride).  Because the previous verse in

O Lord, my heart was not haughty,

nor were my eyes raised on high,

and I did not pursue matters

greater and more wondrous than I.

In the place of rest we are protected for actions or works that are promoted by pride זדים.

The Psalmist sees the great danger that is hidden in these kinds of works, for he says in Psalm 19:

“Also withhold Your servant from willful presumptuous sins; let them not rule and have dominion over me; then I will be perfect and upright, and I will be innocent from the great transgression.”

Another beautiful picture of the place of rest is given to us in the first verse of Psalm 91.

He who dwells in the secret place of the MOST HIGH,

Shall abide under the shadow of the ALMIGHTY.

It doesn’t matter how LONG one prays.  It could be a couple of minutes, or hours.  What matter is that you pray until your spirit stops being aggravated and you enter into the place of rest.  Rules and regulation, pre-formulated procedures, precedents, traditions, interpretative laws are not able to bring you into the rest of HaShem.  It is a matter of the discipline of waiting to allow the presence of HaShem to infuse and to calm your spirit.

I have set the LORD always before me

Until this is done, any actions will be actions of presumption זדים.

This is a trap and a huge danger.  This can be seen from the actions of Moses and Aaron.

Moses is furious with the people.  He yells at them.

Moses and Aaron assembled the congregation in front of the rock, and he said to them, “Now listen, you rebels, can we draw water for you from this rock?” Numbers 20:10

Moses entered onto the slippery slope of presumption.  He said “you rebels, are WE supposed to bring you water (that is, are you expecting ME to do everything?).”  He could have said “look, HaShem is being merciful here.  He told me to SPEAK to the rock this time to show you how good He is, and how easy it is for Him to take care of you. You should worship Him.”

Instead He turns around, and hits the rock in a rage with his rod.

Moses raised his hand and struck the rock with his staff twice. Numbers 20:11

Now at first sight it appears that Moses and Aaron are just doing what tradition has told them to do.  Hadn’t they struck the rock in front of the elders in time past and HaShem had made water to gush out of it?  Tradition would say if HaShem had done it this way before, then it was right to do it that way again and to expect the same results.  But this is the danger of  making a tradition or law out of the acts of HaShem when it is not TORAH.  TORAH is hearing the VOICE of HASHEM קול יהוה and then acting upon His instructions.  His instructions are NOT always the same.  To act upon old instructions, and to elevate those old instructions ABOVE the new instructions is presumption, disobedience and rebellion zedim זדים.  HaShem was merciful and allowed the water to flow out of the rock.

when an abundance of water gushed forth, and the congregation and their livestock drank.

But Moses and Aaron in their anger did not glorify HaShem.  They acted in their flesh.  They acted in their own works instead of the works of grace- the works of the Holy Spirit רוח הקודש.  They put the law of tradition before the Voice of HaShem קול יהוה. They should have waited before the LORD until their own spirits were at rest.  As a result they committed a great transgression פֶּשַׁע רָב. HaShem could not trust Moses because Moses did not trust HaShem and took the glory of HaShem. The severe judgment that the LORD judged was that Moses and Aaron could not enter the Land.

The Lord said to Moses and Aaron, “Since you did not have faith in Me to sanctify Me in the eyes of the children of Israel, therefore you shall not bring this assembly to the Land which I have given them.”