Newest Articles » The Messiah and the Finger of G-d 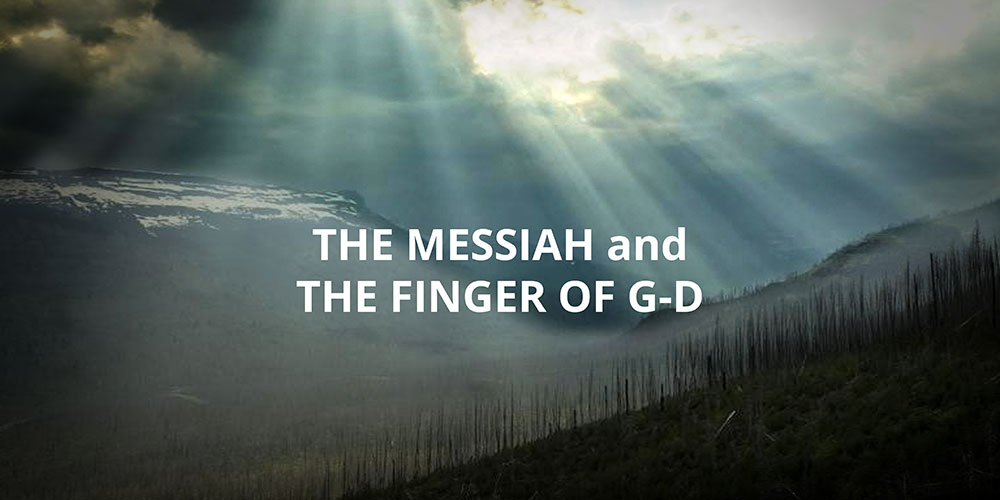 The Messiah and the Finger of G-d

THE MESSIAH and THE FINGER OF G-D

The Lord said to Moses, “Say to Aaron, ‘Stretch forth your staff and strike the dust of the earth, and it shall become lice throughout the entire land of Egypt.’ “

And the necromancers did likewise with their secret rites to bring out the lice, but they could not, and the lice were upon man and beast.

So the necromancers said to Pharaoh, “It is the finger of G-d,” but Pharaoh’s heart remained steadfast, and he did not hearken to them, as the Lord had spoken.

Why did the Egyptian sorcerers say that this plague was the “Finger of Elokim”?  It is because HASHEM had smitten them, and they were covered with crawling fleas that were biting them.  This was a plague that they could not mimic with their sorceries.

HASHEM was getting ready, preparing to take the children of Israel, whom He had multiplied in Egypt, and make a kingdom out of them.

And you shall be to Me a kingdom of priests, and a holy nation.

it was the signet of his rulership, and the scepter or rod of his absolute authority in the kingdom of G-d.

David, the great psalmist and prophet, saw this by the Spirit of G-d רוח אלוהים  when he wrote:

When I see Your heavens, the work of Your fingers, the moon and stars

that You have established

The fact that the heavens belong to HASHEM, and that they are the work of His FINGERS, shows the absolute power of the kingdom of HASHEM.

Then David, that great king of Israel, continues to see by the Holy Spirit רוח אלוהים the absolute power of the Messiah המשיח as he reigns in the kingdom of HASHEM.

Yet You have made him slightly less than the angels, and You have crowned him with glory and majesty

You give him dominion over the work of Your hands; You have placed everything beneath his feet.

The FINGER OF G-D is also for war against the enemy.

This is declared in the Psalm of David:

Blessed is the Lord, my Rock, Who trains my hands for battle, my fingers for war.

This was a great deliverance performed by HASHEM when He delivered all the children of Israel from Egypt. Many had to be set free who had been enslaved, tormented, and possessed by demons. This great deliverance occurred on the night of Passover פסח when they ate the Passover lamb.  For HASHEM declares:

and upon all the gods of Egypt will I wreak judgments I, the Lord.

On this night HASHEM redeemed Israel to Himself; and then a few days later, He made them a kingdom when He caused them to pass through the Red Sea.

After the  Messiah Yeshua ישוע  המשיח had passed through the waters of the Mikveh מקוה in the  Jordan River, he came declaring the Kingdom in all the synagogues of Israel. He declared:

“Repent, for the Kingdom of HASHEM is at hand.”

All Israel had already been prepared by going down to the River Jordan, and going through the waters of the Mikveh מקוה in preparation for entrance into the kingdom of David through the Messiah. המשיח

Why did the Messiah Yeshua   המשיח ישועcast out devils?   He is the King, and he was preparing Israel for the kingdom of HASHEM.

“And Messiah Yeshua   המשיח ישועwent into a synagogue in Capernaum on the Shabbat שבת, and he began to teach. And the people in the synagogue were astonished at his doctrine. For he taught them as one who had tremendous authority, far surpassing anything that they ever had heard from the scribes.

And there was in the synagogue a man who had an unclean spirit, a demon.  And the demon used the man’s voice and cried out:

‘What have we to do with you, Yeshua of Nazareth ישוע מנזרת ?  Are you  come to destroy us?  I know who you are.  You are the Holy One of Elokim.’

And Yeshua ישוע rebuked him, saying, ‘Hold your peace. Quit talking, and come out of him.’

And when the unclean spirit had torn the man, convulsing him, it cried out with a loud voice, and came out of the man.

And they who were in the synagogue were amazed. And they questioned with one another.  And they raised questions saying ‘What thing is this? What new doctrine is this?  For with authority he commands even the unclean spirits, the demons, and they do obey him!’

And immediately his fame spread abroad throughout all regions and synagogues in Galilee.”

The Messiah Yeshua  המשיח ישוע  became so renowned for his ability to cast our devils or demons, that some of the leaders from Jerusalem came down to see him.

“And there was brought to him a man who was possessed with a demon, so that the man was both blind, and dumb, or unable to talk.  And Messiah Yeshua המשיח ישוע  healed the man, casting out the demon. And immediately the man who was formerly blind and mute began to speak and to see.

And all the people were amazed and said: ‘Is not this the Son of David?’

But those who came down from Jerusalem, along with some others, took issue with this statement.  Then they said: ‘He casts out devils through Beelzebub the chief of the devils.’ And others tempted him, seeking from him a sign from heaven (to prove he is the Messiah).  But he knew their thoughts, and understood their way of thinking, and he said to them.

If satan is divided against himself, how shall his kingdom stand?  Because you say that I cast out demons by Beelzebub.

And if I cast out devils by Beelzebub, by whom do your sons cast them out?  Therefore they shall be your judges.

But if I with THE FINGER OF G-D  האצבע אלוהים cast out the demons, know the KINGDOM OF HASHEM מלכות יהוה  is come upon you!”

PrevPreviousThe Messiah, the Torah, and the Tree
NextRav Kaduri and the MessiahNext
Newest Posts
Revelations
The Sabbath
The Torah and Israel
The Torah and the Temple
Uncategorized
Vistas
The Amazing Course Stone