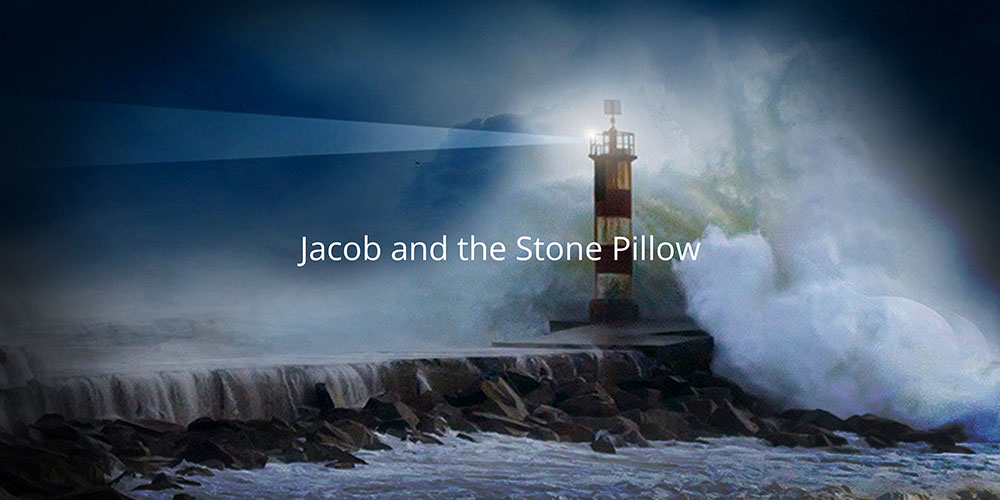 Jacob and the Stone Pillow

Jacob and the Stone Pillow

Jacob took a rock for a pillow. He did not have to do this. He could have used his clothes as a pillow.

He had just come from a long distance from Beersheva on his way to Haran, and he was tired.    It was still a long and uncertain journey to Haran.  It was evening, and the world was becoming dark.

He arrived exhausted at the place that his father Isaac had told him about because his grandfather Abraham had built an altar to HaShem there. Jacob lodged there because the sun had set. He took some of the stones of the place as a pillow for his head, and he lay down.

These rocks represent a HARD PLACE.       He lay his head down on the hard place and RESTED.

When you rest in a HARD place, HaShem reveals Himself to you.

In this place HaShem prophesies to Jacob, and reveals to him his future.

HaShem gives to Jacob the promises.

And behold, the Lord was standing over him, and He said, “I am the Lord, the God of Abraham your father, and the God of Isaac; the land upon which you are lying, I will give it to you and your seed.

And behold, I am with you, and I will guard you wherever you go, and I will restore you to this land, for I will not forsake you until I have done what I have spoken concerning you.”

Because Jacob RESTED in the HARD place, Jacob came to know HaShem, because HaShem revealed himself to him.

Jacob DID NOTHING. It was ALL the doing of HaShem.

It was because of the covenant HaShem had made with his fathers.

The one thing that Jacob did was lay his head down in the hard place, and HaShem did everything else when Jacob RESTED IN THE HARD PLACE.

This is the SECRET of a victorious life.  It is the death of self.

This is the secret of all the great people of God.  They lay down their heads and rested in the hard place.

In the hard place when you rest, this is when HaShem comes to you.

This is the SECRET of DEATH TO SELF.

HaShem has given us the future in our Messiah משיח.  There are difficult times ahead of us, but we are returning and possessing the land because of His covenant.

This is Israel’s history encapsulated.  There are thousands of years of galoot גלות  (dispersion among the nations),  but we returning and possessing the land.

The fact that Jacob fell asleep shows that he truly rested.

This is G-D’s doing; the works were finished from the foundation of the world. Hebrews 4:3

The ladder is there showing that the angels are the ministers to those who are Heirs of Salvation, heirs of the Messiah Yeshua המשיח ישוע .

By G-d’s command the angels are setting things up for the plan of HaShem as we REST in Him.  HaShem is taking us down His path.  This is not predestination.  It is the impact of G-d’s plan.  It is the fruit of the human will that will allow HaShem to be in control.  These preparations are of G-d.

Moses משה chose the difficult path and identified with his downtrodden people instead of enjoying the pleasures of Egypt. HaShem prepared the way, Moishe’s future.

The Messiah המשיח said: “I have come to do your will O G-d.”

Then I said, “Behold I have come, in the scroll of the book it is written of me

O my God, I delight to do Your will and your law is within my inward parts.

Both Moses and the Messiah put their heads on the rock.  They performed the will of HaShem.

It is written in the book of Hebrews that you have to put aside every hindrance and run with patience the race that is set before you.  The sin that so easily besets you: you have to lay it aside and put your head on the rock.  This is the way to get victory over sin, or the yetzer lay ra.  יצר לרע. We can be holy.  It is called the peaceful fruit of righteousness.  It is peaceful because we are in that rest.  We don’t have a root of bitterness.  We have left it aside.  It is really simple.  It is the VALUE OF HARD PLACES.

It is quite amazing.

Jacob took the stone, and set it up, and made an altar and poured oil on it.

And Jacob arose early in the morning, and he took the stone that he had placed at his head, and he set it up as a monument, and he poured oil on top of it.

He kept the rock in his memory.  He set it up as a monument.

This rock is the Messiah המשיח.  The anointing is upon the rock.  The anointing is upon the hard place.  The Messiah Yeshua המשיח ישוע  had to go through the HARDEST PLACE.  This place was anointed by the Holy Spirit.  It is central in our remembrance.  His purchase of our redemption is central to our lives. The tree of death where he suffered was transformed into the tree of life אץ חיים.  To perform the will of HaShem, he laid down his head on the hard place, and he rested.

Jacob encountered Laban his uncle.  But none of the machinations of Laban could derail the purpose of HaShem.  HaShem sent an angel to Jacob in a dream.  The angel turned the machinations which were intended to decrease Jacob into increase for Jacob.   What is intended for evil, HaShem turns into good, and receives glory by showing His absolute sovereignty over all circumstances and difficulties in life.

As it is written:  “All things work together for good for those who love G-d and are called according to His purpose.”

We rest in this declaration.

Israel in all her tribulations can rest in this declaration.

HaShem will perform His covenant and His promise.

The Messiah המשיח has become the chief cornerstone of G-d’s house,

And all we stones are put into it.